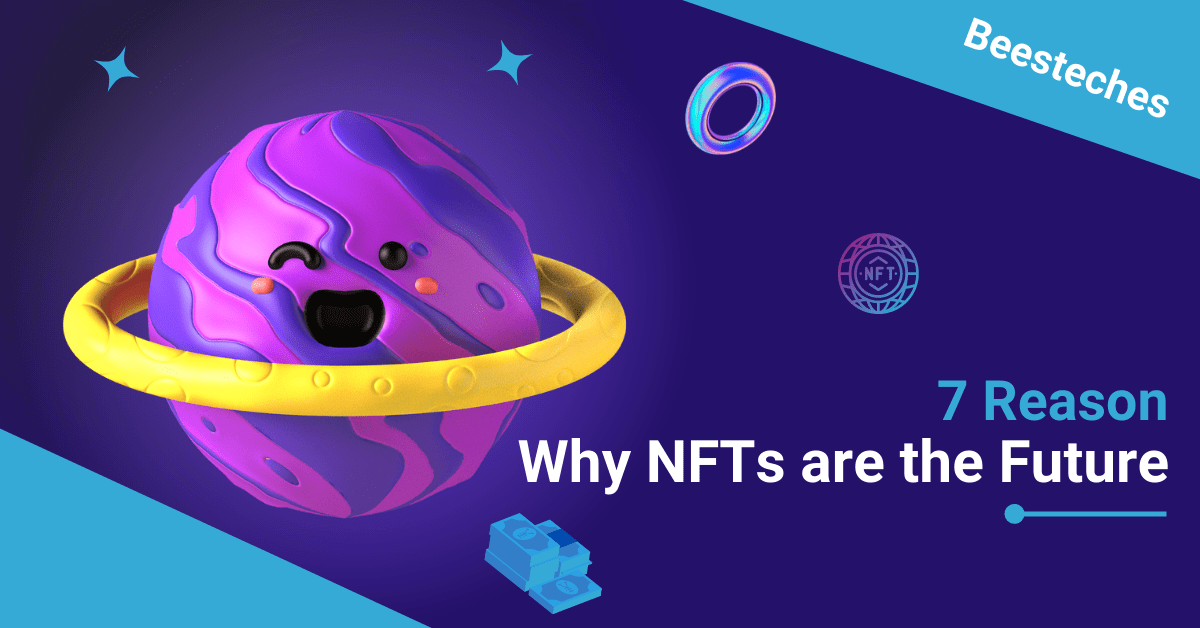 In this article you can get the 7 reasons why NFTs are the future. A CryptoKitties was one of the first non-fungible tokens (NFTs) to hit the blockchain, and it made people take notice of the potential behind digital collectibles.

The increased attention brought about more NFTs, including ones that were non-digital, such as CryptoPunks and CryptoCats.

Now more than ever, NFTs are becoming something very real in the world of cryptocurrency and blockchain technology, and there are many reasons why they will be viable long-term assets. Here are 7 of them.

The value will increase with the adoption

Unlike other digital assets, a non-fungible token is only worth what someone else is willing to pay for it. As more games and platforms adopt non-fungible tokens, they will become an increasingly valuable asset.

Think of rare baseball cards. They have no intrinsic value (you can’t eat them or wear them) but some are worth thousands of dollars because collectors will pay that much for that specific card.

The more users who buy in and trade their assets on game development and use them for trading, the higher valued your assets become.

With a digital item, once you’ve bought it, you will always own it. If a game developer wants to charge players for items that already exist in limited quantities within their game world, they must purchase those items from players who have them (i.e., from players like you).

This creates an economic incentive for buying/selling that is akin to real-world supply and demand economics. that is why the NFTs are the future.

Games will be made easier to monetize

Why NFTs are the future because, you may be noticed anywhere like now most of gaming companies utilize blockchain tokens as a currency to play the game. That’s because, for many game developers, designing a game on top of Ethereum (or another blockchain) is seen as an opportunity to maximize profits.

NFT ownership is completely free from friction. Unlike traditional games, where players may have to stop what they’re doing, go to an app store, make an account and pay a fee just to get started — all things that require both time and energy.

In contrast, in a NFT-based game, all of these barriers have been removed by building the trading system into gameplay itself. Because of that, we’ll likely see free-to-play become less expensive in terms of money (but not necessarily effort) to enjoy.

There are a few reasons why we love to trade assets. First, unlike other collectibles or assets in games, non-fungible tokens can be truly transferred from one person to another.

That’s right – they can really be traded! Second, when you own something, it’s yours. If you ever want to sell it or trade it with someone else, you just do that. No hassles.

They can be used in games for good

Non-fungible tokens (NFTs) can be used as in-game items, and have numerous benefits when compared to traditional games.

Traditional games like Clash of Clans (COC) have currencies that can be used for buying gems or coins, but these can only be transferred from one player to another. With NFTs, however, there is a unique ID associated with each one which allows them to hold value.

Non-fungible tokens (NFTs) have gained a lot of traction over recent months, and many believe they will be used in gaming for a long time to come.

In fact, there’s some good reasons why NFTs are the future and its become more popular than fungible tokens (like ERC-20 Ethereum tokens). One examples: They can be used in games for good – Many people play games for fun, but not everyone plays them with an altruistic spirit.

NFTs are the future because the potential long-term value are good in future NFT, if a product or experience is rewarded with some sort of token that can later be redeemed for something else, people will want it—and they’ll want it now.

We’ve already seen how powerful rewards systems and game mechanics can be, but imagine what might happen if all these new experiences were monetized with tokens.

It is not necessary to buy a NFT to use it in an online game, it can be rented from other users. This incentivizes high-quality game design because players will naturally want to acquire as many NFTs as possible so they can rent them out for money.

If a game has an effective rental strategy, players will have no reason to sell their tokens—they can simply earn more by renting them out on secondary markets.

And unlike today’s games that rarely see any profit after development costs, ongoing revenue is shared with both developers and community members who help grow and nurture a game over time.

While cryptocurrencies like Bitcoin can only be created by miners working through a proof-of-work process.

This means that developers can create coins not just for Ethereum but for any blockchain, giving them access to an array of advanced features. Also: Cryptokitties proved that collectibles could thrive outside a centralized entity.

Cryptokitties proved what was possible

Since Cryptokitties first came out, it’s been an explosion of innovation in non-fungible tokens. This proves that they’re both fun and valuable.

The success of Cryptokitties showed that crypto users were ready for digital collectibles—and these assets only continue to grow in popularity, as people realize how easy they are to create and trade on Ethereum. Here’s a quick rundown of why we think you should be excited about them

It’s a question that will be answered over time, but it depends on your vision and how you can see the NFT. This could be one of those disruptive moments that forces us to rethink how we invest.

More importantly, blockchain-based games represent a new way to make and distribute games for consumers, which could potentially upend existing industries and generate even more innovation.

It may not seem like it now, but blockchain-based games may become common place in years to come.

Why are NFTs a good investment?

Unlike some other crypto-collectibles, NFTs can be traded and exchanged on secondary markets. The liquidity of a token will also help keep it in demand over time as new users continue to enter the ecosystem.

How are NFTs viable?

There’s a lot to be said about them in today’s crypto sphere. Some people are decided to use  NFT, but some will argue that it can not be used on any scale.

People around us wonder why we have decided to use non-fungible tokens, and some will argue that they will never be used on a large scale.

After all, each one is unique and completely different from each other token. But don’t worry – we’ve created a list of 7 reasons why these tokens are better than you think!

How viable are NFTs

NFTs are viable because One of the best characteristics of non-fungible tokens is that their values can grow as players adopt them, sometimes exponentially.

This means that by holding a CryptoKitty you could experience future returns on your investment beyond just being able to sell it on an exchange for money.

Moreover, if CryptoKitties become popular enough in mainstream culture, there is potential for brands and third-party services to create integrations with CryptoKitties.

Is flipping NFTs worth it

Right now, a lot of people think that flipping NFTs is a good way to generate income. While it’s true that early adopters can gain easy profits by flipping rare items, long-term investment in cryptocollectibles won’t be any better than stock market investments or forex trading. Therefore, to benefit from blockchain-based assets, you need to shift your focus away from quick trades and day trades toward investing for long-term value growth.

Does NFTs are the future?

In short, yes. NFTs are the future, because There’s a lot of excitement around blockchain technology, with people predicting it will transform how we do everything from purchase products to make purchases.

That’s already started to happen. But what isn’t obvious is how much room for growth remains, or how quickly that growth could take place. The future might be here sooner than you think.

Does NFTs are the future of art?

Yes NFts are the future of art . But what does that really mean? And why is it important to you? For starters, we can start with a basic definition.

A Non-Fungible Token (NFT) is a token or digital asset which cannot be subdivided or merged into other tokens.

In other words, each NFT is unique. It has no equal or equivalent in its native ecosystem.

These assets can be transferred freely between addresses on a blockchain as long as their unique signature remains intact–and because every NFT represents ownership of an underlying digital resource, once they’re in your possession you actually own them.

So that is why the NFTs are the future of art.