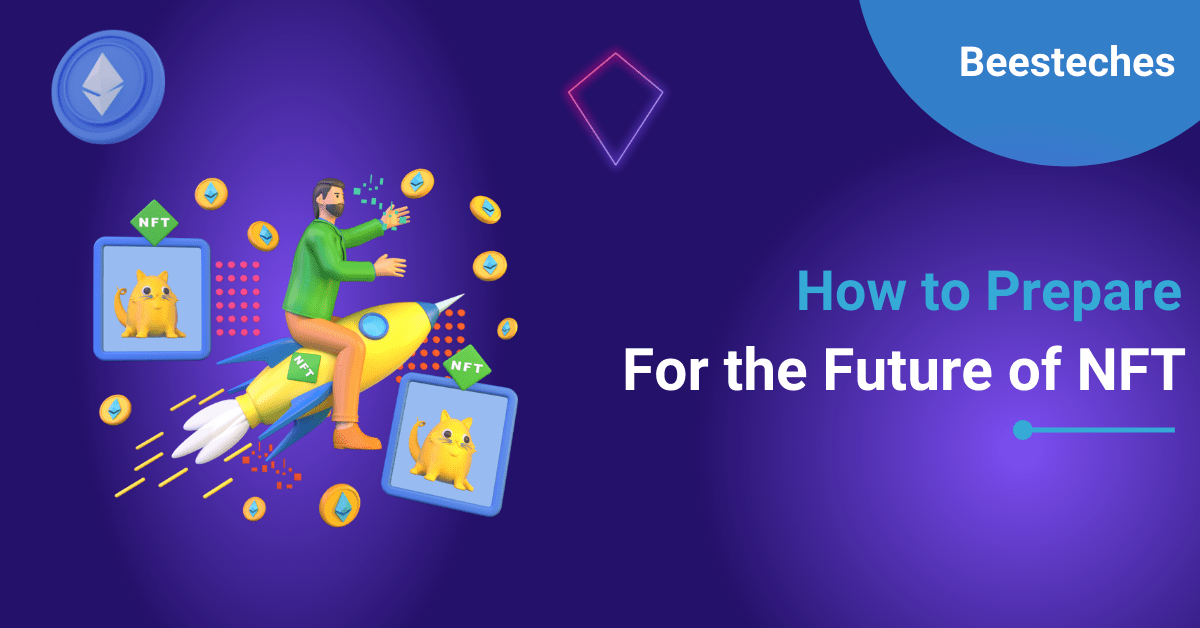 How to Prepare for the Future of NFT yourself and your business for the future of non-fungible tokens? If you’re new to the crypto world, this can be a difficult question to answer.

Let’s look at NFT and what they’re capable of, as well as some ways to utilize them in the real world today, and then discuss some of the most common questions that experts have about their future potential.

The future of NFT is bright. That’s why it’s so important to know how to prepare for its arrival. Today, blockchain startups are already generating revenue through the use of NFTs, and they’re only getting started on their monetization strategies.

It will take some time before everyone understands this new technology, but if you play your cards right, you could be in a prime position to benefit from it now rather than later.

By the end of this article, you should be much more knowledgeable about what NFTs are and why they could be the next big thing in the blockchain industry.

Is there a future for NFT?

Right now every person is talking about what is the future of NFTs. You are also struggling with it. Right?

NFT refers to Non-fungible tokens as are sole digital assets done by blockchain networks. They aren’t intended to be used as a currency, and they don’t necessarily follow standard coin rules: Whereas regular digital coins are meant to represent units of value, NFTs (non-fungible tokens) are digitally unique and cannot be interchanged with one another. so that is why the future of nft are good.

NFT is not now only a business opportunity but people are enjoying themselves while making money. Says Founder and CEO of NFTically Toshendra Sharma. People are investing in NFTs for long-term investment. So the future of NFT will be amazing.

Is there anything good about future of NFT?

Anyone can invest in the NFT. this token asset is reachable to everyone. Ownership of the tokenized into NFT is more easily transferred anywhere in the world.

Ownership of NFT is secured by blockchain: Digitally asset are more secure in block chain technology. It is more transparent. So that is good thing about the NFT.

What are the NFTs and how do they work?

NFT is a digital asset that represents real-world objects like music, art, videos, and games. That you can buy and sell online, at any time with cryptocurrency.

NFT is now booming day by day. Since 2017, a staggering has been spending $174 million on digital artwork.

NFT existed in blockchain and is distributed through record transactions. NFT is held on the Ethereum blockchain.

An NFT was invented and produced from digital objects, which represent both tangible and intangible objects. Including Art, Gift, Video and sports highlights, collectibles, virtual avatars, Designer sneakers, and music.

Users can get ownership rights. Yes, that’s right: NFT can only have one owner at a time. You can easily verify the ownership and transfer history of the transaction. The owner or creator also can able to store the specific information inside them.

The future is upon us, and with it comes a slew of non-fungible tokens (NFTs). NFTs are unique digital assets that will revolutionize everything from gaming and finance to health care.

But before you can ride that wave, there are some things you should know about how NFTs function—and when it’s best to utilize them. Here’s what you need to know about one of today’s hottest technologies.

In fact, it’s more than just a cryptocurrency trend

Today, non-fungible tokens are at a pivotal point in their development. Two years ago, when CryptoKitties first launched, few foresaw just how much impact they would have on blockchain technology and game design.

The benefits of NFTs and blockchain technology

This may be because non-fungible tokens were first introduced to collectibles, but some people believe that NFTs have intrinsic value. (Not all NFTs are collectibles, though; many represent ownership over an object or a person.) Collectibles don’t depreciate. Once you own them, they can be sold and traded as long as someone is willing to buy them.

NFTs do not have a real-world equivalent. By virtue of that, NFTs are difficult to value and difficult to compare against other assets.

In some ways, owning an asset like a gold bar is easy – if you own it, you know its exact worth (assuming it’s been properly authenticated). Compare that with owning one of CryptoKitties, which requires not only buying it but also feeding it virtual cat food and keeping it in good condition.

One could argue that owning any NFT is as much about caring for your asset as owning something tangible.

Where do we go from here?

Since a finite number of NFTs will be created, and anyone NFT is as good as another, it’s reasonable to assume that digital scarcity will drive up NFT valuations.

Of course, there’s no way to predict exactly how popular non-fungible tokens will become. But by investing in them now, investors will likely profit more in coming years than if they had invested in other types of cryptocurrencies.

Long term, there’s no telling what new applications NFT technology could be used for; game developers might even start using their platforms and create new ways we interact with our favorite games.

So what should developers be doing now?

CryptoKitties are more than cute and cuddly — they represent a new way to prove ownership and transact value.

If you’re interested in non-fungible tokens (NFTs), it’s time to get excited about CryptoKitties, because these digital collectibles are about to change everything. After all, once people get their hands on NFTs, there’s no going back.

That’s why I’m predicting that CryptoKitties will save an entire generation from spending hundreds of hours memorizing facts in school — and it won’t stop there! Here’s how crypto kitties could change your life forever…

Can CryptoKitties really save the world?

All kidding aside, CryptoKitties is a pretty ambitious undertaking. As with any new project or product, there are bound to be some major hiccups along the way.

But in an industry that’s still relatively young and exciting, CryptoKitties has a good chance at being a leader in their field.

They’ve managed to garner quite a bit of attention—and respect—in their short time on the scene; they were accepted into Y Combinator as part of their Winter 2018 batch and they were also recently accepted into The Nova Project accelerator program.

There’s no doubt that CryptoKitties will continue its upward trend as it becomes more well known and people start learning about all its unique features.