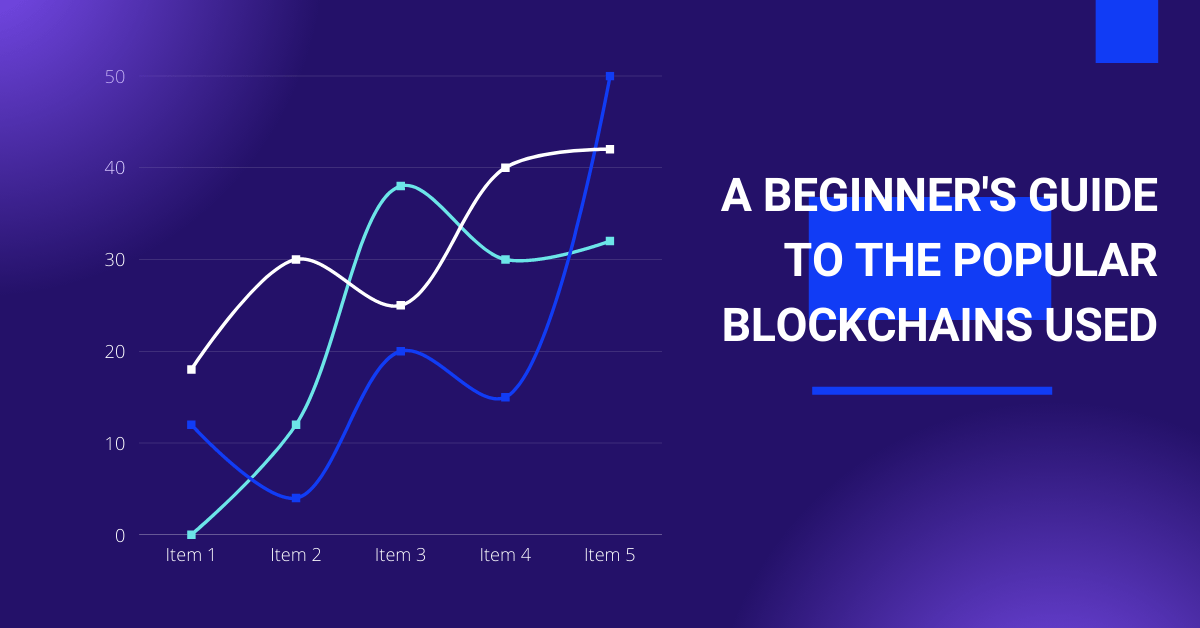 The world of cryptocurrencies and blockchain is changing rapidly. If you are an influencer or even an avid gamer, you will be well aware of the issues regarding the scalability of the blockchain and the comfort of the user. This is where Non-fungible tokens (NFTs) come in.

They help to address some of the issues within the blockchain and improve the performance of the blockchain. This blog will be a beginner’s guide to the popular blockchains used for NFT development.

As the most popular blockchain for NFT development, Ethereum offers a lot in terms of scalability, security, and extensibility. However, it also comes with some downsides. For one, Ethereum is slower than some of the other options out there.

Additionally, transaction fees can be high, depending on network congestion. Lastly, Ethereum does not allow for cross-chain transactions, meaning that transactions cannot be made from one chain to another without using an intermediary token or wallet. Nevertheless, developers continue to use Ethereum because it allows them to create decentralized applications (DApps) with functionalities like smart contracts. Other chains such as Qtum and EOS are trying to offer better alternatives by providing faster speeds and lower transaction costs.

Some new blockchains such as Lisk aim to provide an easier entry point into the world of DApp development. They provide Javascript libraries which are highly familiar to developers who may have limited programming experience. Regardless of what your preferences are, you’ll want to do your research before settling on a particular platform for your project.

Some of the popular blockchains used for NFT development are Ethereum, EOSIO, and Tezos. All three offer different advantages in terms of speed, scalability, and security. The trade-off is that there will be a transaction fee with each one. In some cases, it can make sense to have separate wallets for each blockchain depending on what type of game you’re developing.

Tezos is a blockchain that natively supports smart contracts, a technology that aims to bring the same trust and automation to contractual law that the internet brought to the media.

Tezos found a way of allowing its community to participate in the evolution of the protocol. The community can vote on proposed protocol changes. A mechanism to facilitate proposals and discussion is in place.

Tezos also supports formal verification, which allows for mathematical proofs of correctness of the protocol. Tezos has a built-in consensus mechanism and a user-friendly token economy.

If you’re looking to get started with NFT development, Solana is a great choice. You’ll be able to explore a variety of different use cases without any downtime or network congestion. For example, there are many potential uses for artificial intelligence (AI) that can be realized by developing AI systems on the Solana blockchain. Imagine creating an app that analyses medical records and creates personalized treatment plans for patients.

These apps could be developed using data from decentralized sources like genomic databases and clinical trials. Developers would be able to rely on the Solana blockchain to run these complex algorithms quickly and securely. And when paired with non-fungible tokens, developers can ensure only specific people have access to their content in order to avoid fake news scenarios in which misinformation spreads unchecked.

WAX is a decentralized platform on the blockchain, built for virtual goods trading.The platform is designed to serve videogames, who are the primary customers of WAX. WAX allows them to buy and sell virtual goods in a trusted, low-risk, and secure environment.

The WAX platform is based on Ethereum. Using WAX is as simple as visiting a website or using a smartphone app. Wax can be purchased from the website or from an exchange. Users can use Wax to trade in-game items. It is sometimes listed on cryptocurrency exchanges with the tick

Worldwide Asset Exchange, or WAX is a decentralized platform that enables anyone to operate a fully functioning virtual marketplace with zero investment in security, infrastructure, or payment processing. Developed by the founders of OPSkins, the world’s leading marketplace for online video game assets, WAX is designed to serve the 400+ million online players who already collect, buy and sell items online. With the inclusion of WAX’s simple exchange widget, gamers will have access to a worldwide market with blockchain trust and transaction verification. So the WAX is the good for NFT development.

The flow blockchain is a blockchain platform that was developed for everyday use for things like trading and gaming. For example, you can use flow to create non-fungible tokens to use in a game.

People are excited about using blockchain to make applications and create digital assets. While building a blockchain from scratch isn’t straightforward, there’s a blockchain API that can help. Flow is a blockchain API built with scalability and performance in mind. It’s being used to build Decentraland, the world’s first virtual reality blockchain-powered game.

Now, most of the people who know how to create something simple and useful, that could change the way we interact with the blockchain. The goal here is to build a fully decentralized application with the capacity to handle billions of transactions per second. that is why flow is best for NFT development.

Binance Chain is a proposed project under Binance.com, it is still under development with a release date set for March 2019. The release date may change, with Binance stating that they will make announcements closer to the date. It aims to be a decentralized exchange and financing platform.

Binance is one of the largest cryptocurrency exchanges and has been called the “undisputed king of crypto trading pairs”. This is clearly demonstrated by the number of people who use the Binance platform and the number of coins listed.

The Binance team have released their own blockchain which will be used to store historical data related to Binance transactions. The unique feature of the Binance blockchain is the Binance Changer which enables users to do atomic swaps in a decentralized manner.

The crypto industry is starting to see the real-world applications of blockchain technology, mainly with the emergence of decentralized exchanges. However, there are still problems that exchanges have to face, even with the decentralization of their systems.

One of the major issues of decentralized exchanges is the speed of trading. Most of these exchanges have a slow transaction speed, which is due to the fact that they use a system of confirmation-based trading. Binance’s new development, the Binance Smart Chain (BSC) aims to try and solve this problem.

The blockchain is a fascinating technology that has many uses. A blockchain is a distributed ledger that is used to store data. A blockchain is an ever-growing list of records called blocks, stored on a decentralized network of computers. Each of these blocks contains a timestamp and a link to a previous block. By design, a blockchain is resistant to modification of the data.