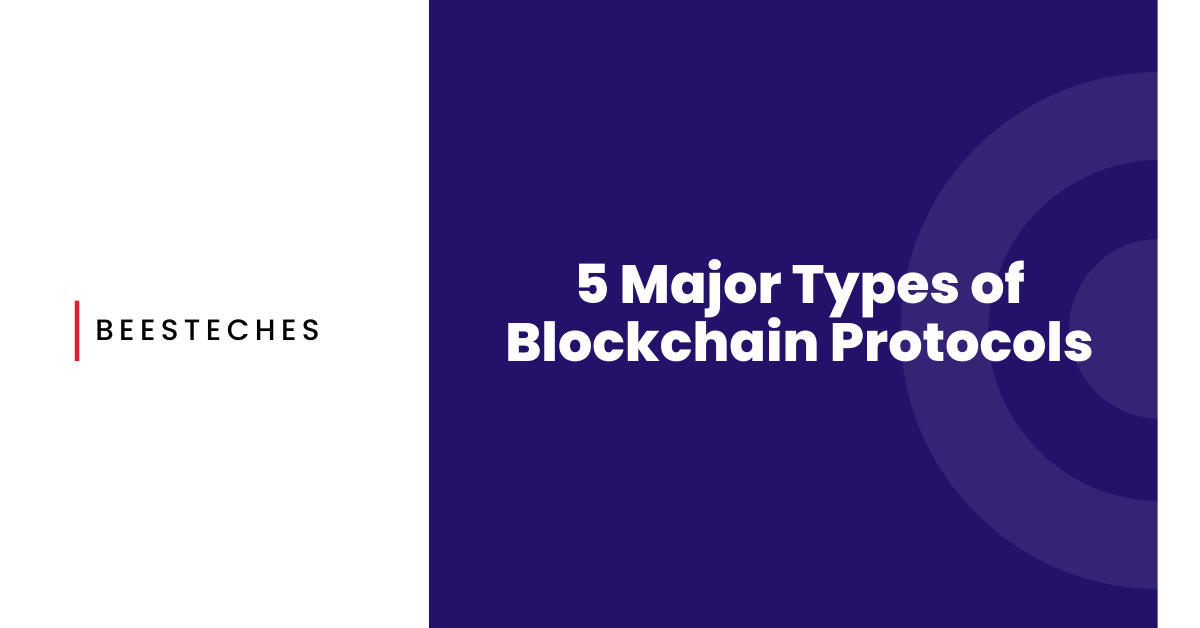 The blockchain protocol is the set of rules that govern how a blockchain network operates. It defines how transactions are processed, how data is stored and secured, and how consensus is reached among network participants.

In this article, we will discuss the 5 major types of blockchain protocols.

A protocol is a set of rules or guidelines that define how different systems or components should communicate and interact with each other. Protocols can be used in a wide range of contexts, including computer networking, telecommunications, and blockchain technology.

In computer networking, protocols are used to standardize how devices communicate over a network. For example, the Internet Protocol (IP) is a protocol that defines how devices on the internet can send and receive data packets.

In telecommunications, protocols are used to define how different devices and systems exchange information over a communication channel. For example, the GSM (Global System for Mobile Communications) protocol is used to standardize how mobile phones communicate with each other and with cellular networks.

In blockchain technology, protocols are used to define how transactions are processed and added to the blockchain, how data is stored and secured, and how consensus is reached among network participants. Different blockchain protocols have different features and characteristics, and are suitable for different types of applications and use cases.

What is the Blockchain protocol?

The blockchain protocol is implemented through a combination of software and hardware. It is typically implemented as a decentralized, distributed database that is maintained by a network of nodes. Each node in the network has a copy of the blockchain and communicates with other nodes to validate and record transactions.

The blockchain protocol specifies the rules for adding new transactions to the blockchain, such as the requirements for validating transactions and the method used to reach consensus among network participants.

It also defines the rules for securing the blockchain, such as the use of cryptographic techniques to ensure the integrity and confidentiality of data.

There are many different blockchain protocols in existence, each with its own unique features and characteristics.

A distributed ledger is a digital record of transactions that is stored and maintained by a network of computers or nodes, rather than a central authority. Each node in the network has a copy of the ledger and the transactions are replicated across all nodes, ensuring that the ledger is distributed and decentralized.

Distributed ledgers are often used in blockchain technology to create a secure, transparent, and immutable record of transactions. They can be used for a wide range of applications, including financial transactions, supply chain management, and identity verification.

One of the key features of a distributed ledger is that it allows multiple parties to access and update the ledger in a secure and transparent way. This is made possible through the use of cryptographic techniques and consensus algorithms, which ensure that the ledger is kept up-to-date and accurate.

Smart contracts are self-executing contracts with the terms of the agreement between buyer and seller being directly written into lines of code. The code and the agreements contained therein are stored and replicated on a blockchain network.

Smart contracts allow for the automation of contract execution and enforcement, reducing the need for intermediaries and increasing the speed and efficiency of executing agreements. They can be used to facilitate, verify, and enforce the negotiation or performance of a contract.

Smart contracts can be used in a variety of applications, including financial transactions, supply chain management, and voting systems. They have the potential to revolutionize the way we conduct business and interact with each other by reducing the need for intermediaries and increasing the security and transparency of transactions.

A 51% attack is a type of attack on a blockchain network in which a single actor or group of actors control more than half of the network’s mining power, also known as the “hash rate.” This allows them to have the majority of control over the network and the ability to alter the blockchain’s transaction history, block new transactions, and double-spend coins.

In a proof-of-work (PoW) blockchain like Bitcoin, miners use their computing power to solve complex mathematical problems and create new blocks, which are then added to the blockchain. Miners who solve these problems are rewarded with a certain number of coins.

If a single miner or group of miners control more than half of the network’s mining power, they have the ability to dominate the network and potentially manipulate it to their advantage. This is known as a 51% attack.

While 51% of attacks are theoretically possible, they are extremely difficult to execute and would require a significant amount of resources and coordination.

In addition, the value of the cryptocurrency being attacked would likely drop significantly, making the attack financially infeasible. As a result, 51% of attacks are rare and have not been successfully carried out on well-established cryptocurrencies like Bitcoin.

Coins and tokens are digital assets that are used for various purposes on blockchain networks. They are often used as a means of exchange, similar to traditional currencies, and can be bought and sold on cryptocurrency exchanges.

Coins are digital assets that have their own independent blockchain and are used to facilitate transactions on that particular blockchain. Examples of coins include Bitcoin, Ethereum, and Litecoin.

Tokens, on the other hand, are digital assets that are built on top of an existing blockchain. They represent a particular asset or utility and are often used to raise funds for a specific project or to represent a share in a company. Tokens can be created on a variety of blockchain platforms, such as Ethereum, which uses smart contracts to create and manage tokens.

Both coins and tokens can be traded on cryptocurrency exchanges, but they have different characteristics and serve different purposes. It is important to understand the differences between coins and tokens and to carefully evaluate their potential value and risk before investing in them.

Hyperledger is an open-source collaborative effort created to advance cross-industry blockchain technologies. It is a project of the Linux Foundation and is supported by a diverse group of organizations, including tech companies, financial institutions, and supply chain management companies.

Hyperledger aims to help organizations build and deploy blockchain-based applications, platforms, and hardware systems for a variety of purposes, such as supply chain management, financial transactions, and asset tracking. It provides a range of tools and resources, including modular frameworks and libraries, for developers to build and deploy blockchain applications.

Hyperledger is designed to be secure, modular, and flexible, and it is used by a variety of organizations across different industries to build and deploy blockchain-based solutions.

MultiChain is an open-source platform for building and deploying private blockchains. It is designed to be easy to use and allows organizations to quickly create and manage their own blockchain networks.

Private blockchains are decentralized networks that are not open to the public and are typically used by organizations to share data and conduct transactions within a closed group of participants. Private blockchains offer many of the same benefits as public blockchains, such as security and immutability, but with added control and privacy.

MultiChain allows organizations to customize their blockchain networks according to their specific needs and requirements. It includes a range of features, such as customizable consensus algorithms, support for multiple assets, and the ability to add and remove nodes from the network.

MultiChain is used by a variety of organizations, including financial institutions, supply chain companies, and government agencies, to build and deploy private blockchain-based solutions. It is designed to be scalable and efficient, and it offers a range of tools and resources for developers to build and deploy blockchain applications.

Corda is built on a distributed ledger technology (DLT) platform and is designed to enable secure and private transactions between identified parties. It is focused on addressing the specific needs and requirements of the financial industry, such as compliance with regulatory requirements and the need for privacy.

Corda allows financial institutions to build and deploy decentralized applications (dApps) that can facilitate secure and efficient transactions and record-keeping. It includes a range of features, such as smart contracts, consensus algorithms, and support for multiple assets, to enable the creation of complex financial transactions.

Corda is used by a variety of financial institutions and other regulated industries to build and deploy blockchain-based solutions. It is designed to be scalable, secure, and compliant, and it offers a range of tools and resources for developers to build and deploy dApps on the Corda platform.

Enterprise Ethereum is an open-source platform that allows organizations to build and deploy decentralized applications (dApps) and smart contracts on a private, permissioned blockchain network. It is designed to be scalable, secure, and easy to use, and it includes a range of features and tools for developers to build and deploy dApps.

Enterprise Ethereum is used by a variety of organizations across different industries, including finance, supply chain management, and healthcare, to build and deploy blockchain-based solutions. It offers the benefits of Ethereum’s decentralized platform, such as security and immutability, while also providing the added control and privacy that businesses often require.

Quorum is an open-source blockchain platform that is designed specifically for enterprise use cases. It is based on the Ethereum blockchain and uses the same underlying technology, but it is optimized for use in private, permissioned blockchain networks.

Quorum is developed and maintained by JPMorgan Chase and is used by a variety of financial institutions and other regulated industries to build and deploy decentralized applications (dApps) and smart contracts. It is designed to be scalable, secure, and compliant, and it includes a range of features and tools for developers to build and deploy dApps.

One of the key features of Quorum is its support for private transactions, which allows for the exchange of sensitive information on the blockchain without revealing the details of the transaction to the entire network. Quorum also includes a range of consensus mechanisms, including the ability to use voting-based consensus, to allow organizations to customize the operation of their blockchain networks.

Quorum is used by a variety of organizations to build and deploy blockchain-based solutions, including financial institutions, supply chain companies, and government agencies. It offers the benefits of Ethereum’s decentralized platform, such as security and immutability, while also providing the added control and privacy that businesses often require.

In conclusion, blockchain protocols are the underlying technology that powers blockchain networks. They define the rules and standards that govern the operation of the network, including the consensus algorithm, data structure, and security measures.

Blockchain protocols have the potential to revolutionize the way we conduct business and interact with each other by providing a secure, transparent, and decentralized platform for conducting transactions and exchanging information.

They have a wide range of applications, including financial transactions, supply chain management, and voting systems, and are being used by a variety of organizations across different industries.